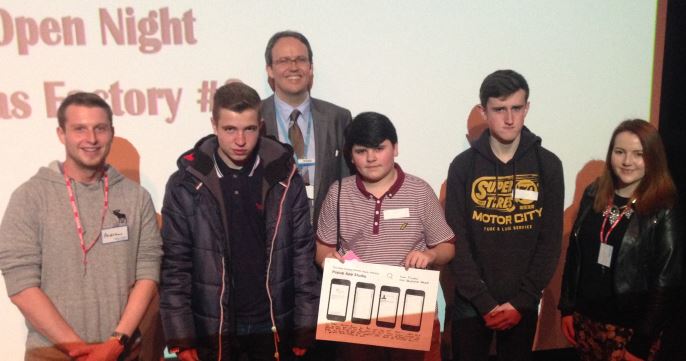 This week we opened our doors to young people from across Merseyside to take part in the second event in our Ideas Factory series. We invited prospective entrepreneurs and creatives aged between 11 and 16 to attend our Pop-Up app workshops which were being held by a range of development companies from the local area. Over 100 student delegates attended, and we were blown away by the inspiring range of ideas and knowledge demonstrated.

Five local app development companies; Apposing, Citrus Suite, Draw & Code, Black & Ginger and SoopBoop came together to provide an insight into the creation of mobile applications. Supported by sponsors FACT and Apposing, attendees were allocated to a specific Pop-Up studio depending on their interests, and were asked to choose one of three pathways to focus on; Creativity, Coding or Entrepreneurship. There was a wide range of interest in all three pathways, with some students having already started work on relevant projects in their spare time at home. Attendees were taught the importance of generating a strong X Statement to brand their concepts, and worked hard to put together a creative and effective wireframe; a visual guide which demonstrates the skeletal framework of an application.

The Ideas Factory Challenge asked each group to create a concept for an educational mobile application, challenging them to consider how they would ensure a positive user experience and implement an effective launch campaign. Every single team came up with a great idea, ranging from an app to submit homework from home to a ‘Study Buddy’ which would allow students to track their revision. A winner was selected from each Pop-Up studio, with the final five ideas going head to head in the final showcase.

After a three minute pitch from each shortlisted group, three winners were selected by Studio Principal, Shaun McInerney and Tisha Pryor from Studio Schools Trust.

Mentored by Citrus Suite, Team L4E (Learning 4 Education) were chosen as one of the winners for their concept which rewards students for punctuality and revision. Users can earn in-app currency called ‘GP’, which can be exchanged for real life rewards such as extra break time. The team were also praised for their well thought through X Statement; ’Motivation through connecting’. Next up was Team Clueless for their Student Chat App, encouraging direct communication between students and staff. Finally SoopBoop’s team Progress/MainFrame were announced as winners for their innovative concept which tracks the amount of revision being done for each specific subject.

The three winning ideas will be the focus of the next Ideas Factory event, which is being held on Tuesday 27th May, and the concepts will be displayed as part of a special exhibition at FACT.