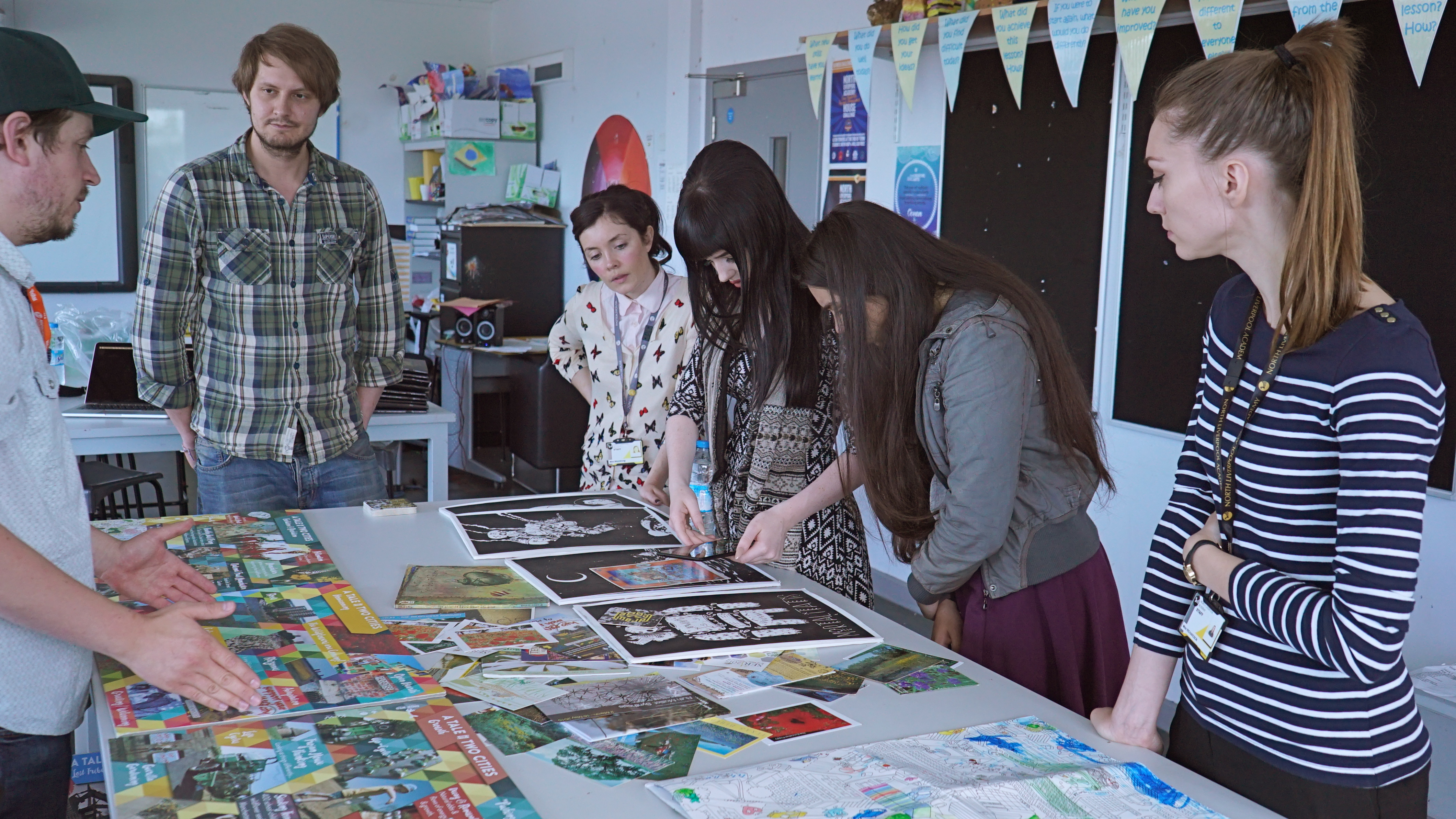 Draw and Code are a city-centre Creative and Digital Design agency who produce (amongst other creations) projections and animations, which they demonstrated to students utilising their augmented reality technology. Students scanned their work with a mobile device and it came alive on their phone, they were captivated and it was an exciting glimpse of the possibilities for new digital media. “Who knew this kind of thing was even possible?” thought Selina, a current year 13 art student.

For these graphic workshops we explored the role of collaboration through “Exquisite Cadavers”. This is a creative game, favourite by the Surrealist Movement, where one person draws a head on a sheet of paper, folds it over, and another draws the body, then another the legs, creating a truly entertaining end piece. This game was fun, and helped illustrate the intentions for the main workshop – the concept of multiple people contributing to a sum of the parts that will form future film or animations. We also drew freely from geometry found in nature, repetition, spirals, tessellation.

“I have enjoyed having absolute freedom to choose formats – from very small to large-scale during this project” said art student Amy.

The purpose of these sessions was to generate a wealth of graphic elements which will feature in the animation Draw and Code that will soon be produced, so watch this space.

In another session we made crossover links with music working with Whitworth Art Gallery and Metal Liverpool. They are currently working on vinyl projects and will be collaborating, alongside ourselves, to create a vinyl record with songs and poems from young writers across Liverpool and Manchester. We had a small vinyl record player which played inspirational music. Nikki Blaze, a graphic artist, brought her professional portfolio along for viewing. Her work included action figures and we learned about her role as a professional and commercial artist having designed work for Comicon, the biggest multigenre entertainment and comic convention. Nikki offered practical drawing tips and advice and we got hands on experience creating large scale drawings.

One of the final sessions of the academic year saw the entire department erupt into creative play and exploration, as a set of 3D pens were unboxed for the very first time. They proved impossible to put down – even for the art teachers. “It was so surreal to draw and line, and for it become a 3D form. Our patterns became forms that could stand on their own. I was expecting the plastic to be hot, like a glue gun, but it wasn’t. The whole process blew my mind” said Sixth Former Sai.

The staff were enraptured by the technology. Miss little thought it was, “Oodles and doodles of fun!” and Mr Crompton thought “it was fascinating constructing 3D objects by drawing into the air”. The newest teacher to the art team, Miss Roberson, was equally enthralled, “It was excellent to break the usual boundaries of drawing and creativity”.

This is such an exciting project and is continuing into the autumn term, so there is still time to get involved if you wish, please speak to Miss Donnelly for more information.