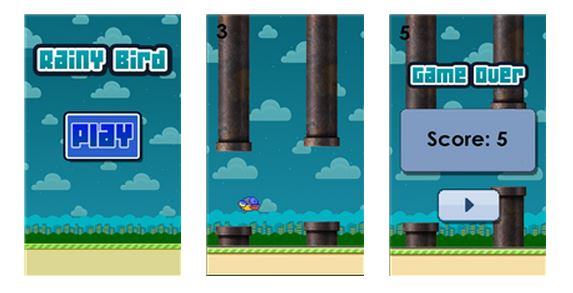 We have all heard about the craze that was Flappy Bird, but now a new app has arrived on the Windows Store and is bringing in thousands of downloads by the day! A talented team of Studio students have this month been celebrating a great achievement as their mobile application ‘Floppy Bird’ was launched for Windows devices. Jordan Kabyemela and Adam Galloway from Year 10, and Charlie Curran-Jones from Year 11 have been working together on the project in their spare time.

The app has already had over 100,000 downloads, with the number constantly rising. Their mobile application is a rebuild of the game Flappy Bird, a 2D tap-to-fly sidescroller, only with added focus on providing a better graphic experience. The app also uses advanced in-game physics, which is something that stands their version apart from the original. They have added rain into the gameplay which pushes against the user, forcing them to fly against the elements whilst trying to not touch the rusty piping surrounding the bird in flight.

When asked about the success of their app, Jordan said: “I love having a successful game, as I feel like I’ve made a genuine contribution to a growing market. It inspires me to make new games and this one is only the beginning”.

The students’ app Floppy Bird is available to download for Windows Phones from the Windows Store.