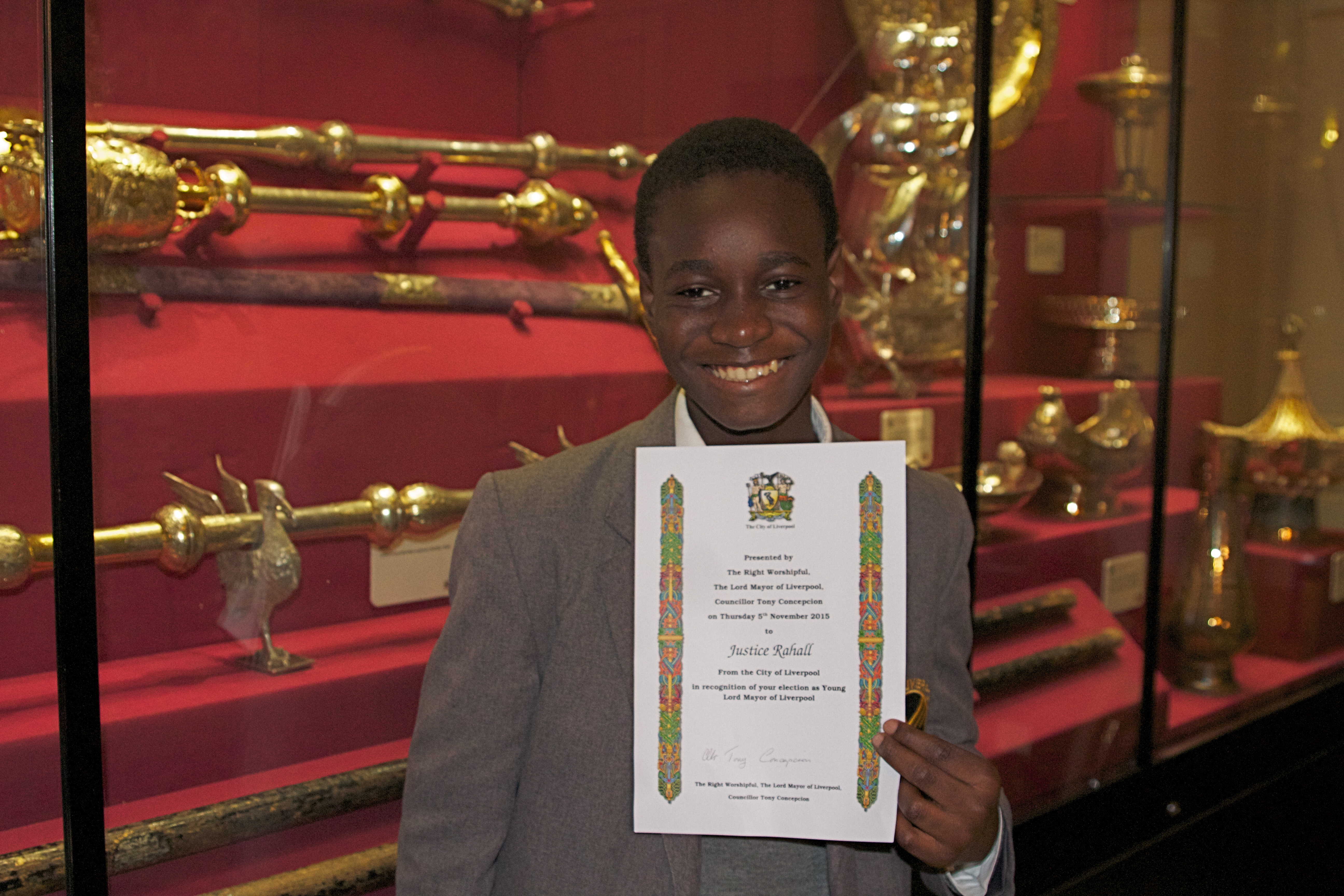 Recently we reported that Year 8 student Justice was elected as one of Liverpool’s 12 Young Lord Mayors. Here he tells his story about the election process and how he felt putting himself forward.

“It was a normal student voice meeting when Mrs Challinor announced to us the process for being Young Lord Mayor 2015 was open and asked us if we were interested. Without hesitation I sprung my arm right up in the air as did one of my closest friends Kevin. Out of our year there was Myself, Kevin and Anna as well as 5 year 9 students and last year’s Young Lord Mayor Michael who is in year 11.

On the 15th of October the 9 of us and Mrs Challinor went to the Town Hall for the speeches and elections. We were met by Jeff Dunn the co-ordinator of Liverpool Schools Parliament who then led us to the council chamber. The speeches started one by one, there was 34 candidates in total and we were called out in alphabetical order. I watched Kevin go up and make a speech which he had decided to do without writing down, straight from the heart. He delivered such an amazing speech and got a massive round of applause. Finally it was my turn, I was excited, happy and feeling that tingle you feel when you’re about to do something great. Then all of a sudden it went away, my joy and happiness disappeared! My heart beat grew louder; I made my way slowly to the podium where I could see roughly 100 pairs of eyes looking at me with such raw emotion. In the audience I saw Kevin, Mrs Challinor and the others from our school who were all looking at me as if to say ‘I believe in you’ and this made me feel more confident. At the start of my speech I was nervous but once I got into it I talked and talked and just spoke from the heart.

The next day Mrs Challinor told us who had been elected and it was me! I was the only one from our school. Kevin was glad, Anna was frustrated but they both congratulated me and were happy for me. I felt so happy and proud of myself. The news got out around school and the other students and the teachers were congratulating me which made me feel really good. A few days later Mrs Challinor asked me which month I would like to do my duties on and I said I would like June because it is my birthday month.

On November 5th we were invited back to the Town hall for the inauguration of all the young and junior lord mayors. We met in the ballroom for lunch where the Lord Mayor and Lady Mayoress came to speak to us and then went down to the chamber room for the ceremony. The 24 Junior and Young Lord Mayors were sat in alphabetical order. One at a time we had to go to the front make a declaration to the Lord Mayor, sign an official document and have our picture taken. My Aunt made it in time for the end of the ceremony and was really proud of me. At the end of the ceremony we had a group photo taken on the main staircase. Then myself, my aunt, Mrs Challinor and Mr Corner went back into the council chamber to take some photos and I had my picture taken in the Lord Mayors chair!

It was a great day and not a bad way to spend my afternoon! I have made some new friends and I am really proud of my achievement and I am really grateful for the people who supported me.”

You can see Justice’s inauguration here: