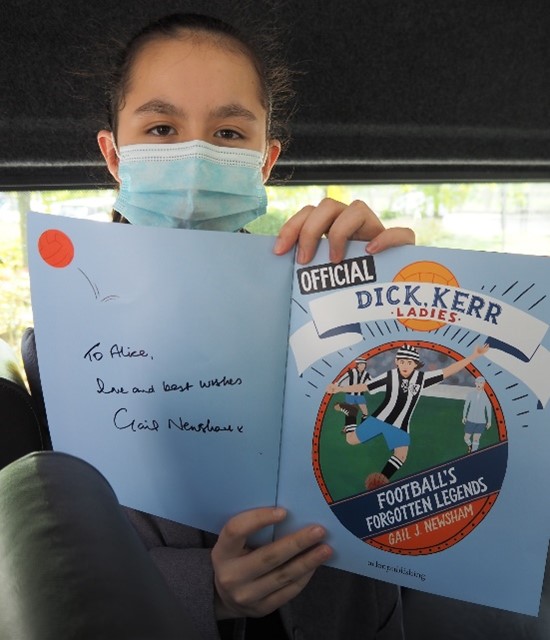 Year 7 students Anastasija, Jenny and Alice have had the incredible opportunity to meet and interview author Gail Newsham.

Gail Newsham is an ex-footballer and author of ‘In a League of Their Own!’, the official history of Dick, Kerr Ladies FC. She has written the first book about ladies’ football to be written by a female football player.

The book, Dick, Kerr Ladies : Football’s Forgotten Legends is about the first professional ladies football team which was started by a group of people in a munition factory in 1917 to raise funds for wounded soldiers. Dick, Kerr and Company Limited enlisted the help of thousands of women while the men were away fighting in France.

The Dick, Kerr Ladies played their first game at Deepdale, the home of Preston North End on Christmas Day 1917 in front of 10,000 spectators. They won 4-0 and raised £600 for the wounded soldiers. And so began the most incredible success story in the history of women’s sport. They went from strength to strength and always played in front of big crowds. By 1921 they were the team that everyone wanted to see and had been booked to play an average of two games a week. However, the FA was not happy with the ladies’ success and on 5 December 1921 the FA banned them from using League grounds and effectively changed the course of the women’s game forever. The ban lasted for fifty years and was probably the biggest sporting injustice of the last century.

The girls had the chance to discuss Gail’s book and asked Gail how she had researched the story, whether she had always wanted to be an author and was she writing another book.

In a further twist, on Tuesday, the girls had the opportunity to visit Deepdale, the Preston North End ground to see a monument to the team and learn more about Gail’s inspiration for the book. They enjoyed some brilliant displays of the history of the team, further building their literacy skills and their understanding of local history. Much to their surprise, author, Gail met them at the monument and even signed a copy of the book for each of the girls.

Ian Mooney, Literacy Specialist at NLA coordinated this amazing opportunity for our young students. He says, “The girls read this book in their own time and prepared some great questions for their zoom meeting with the author. They were interested in the process of research and also how someone might become an author. They didn’t know they would actually meet the author but chatted happily with her during our visit to the football ground. The students have had a brilliant opportunity to see first-hand how important reading is and have also had the opportunity to see how interesting it is when you find out new things that happened not far from where you live.’

All three girls read the book in a weekend and now have their own memento of this fabulous story.

Anastasija says: “I enjoyed the book because it was different to other books. Yesterday’s trip was so unexpected, we learnt lots about the history of women’s football and it was a great surprise when Gail arrived to see us. I feel inspired to read more and learn more about the lives of people in the past.” 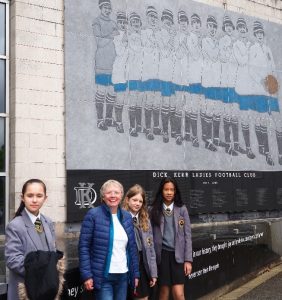 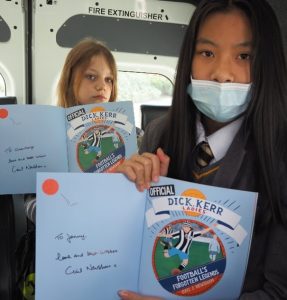